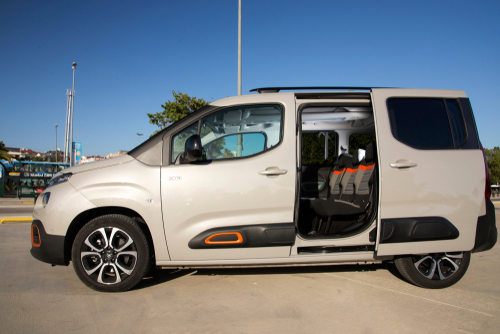 PSA Peugeot Citroën began producing the Citroën Berlingo in 1996. The Citroen Berlingo is built as a people mover or Leisure Activity Vehicle (LAV), panel van, and pickup truck. It succeeded the Citroën C15 and Peugeot 305 panel van. The vehicle has rectangular cargo space and a sleek front. It is manufactured in CNG, petrol, diesel and electric versions, giving all the more options to the customers.

Only one of the concept cars mentioned above reached the production phase – the Grand Large – which was developed into people movers or LAVs.

Berlingo/Partner I was available in petrol, diesel, electric and CNG engines. It went through a facelift in 2002 which resulted in a fully revamped interior. The front end also received modifications during this facelift. Later, a minor facelift redesigned the grille and light clusters.

The powertrains offered at the time were:

In Australia, the Berlingo was only available in 2-door, 2-seat commercial panel van variant, powered by the 1.4L TU3 petrol engine (58 kW, 111 Nm). The base model featured power steering, radio cassette with two speakers, seatbelt pretensioners, and a trip computer.

Berlingo/Partner II was available in the following body styles:

They were available in the following powertrains:

The initial release of this generation was in 2008. Later, an electric version also made to the markets in 2013. In 2017, a 5-seater version called the Citroën E-Berlingo Multispace joined it.

The electric version, called Berlingo Electric, had the power of 49kW and a torque of 200 N.m.

The Australian-released second-generation Berlingo was again only available as a commercial panel van, but this time, with both diesel and petrol variants and in long and short wheelbases. The base features included a driver’s airbag, air-conditioning, ABS cruise control, cloth trim, engine immobiliser, power mirrors, power steering, radio CD with two speakers, sliding side door, and a trip computer. The trims and powertrains offered in Australia for this generation were:

The base model from the first generation continued to be available until 2010, overlapping with the second generation trims.

The model for the third generation was revealed at the Geneva Auto Show in 2018. The company acquired Opel in 2017 after which this model was also retailed as the fourth generation of Opel Combo. The third-generation Berlingo was available in the following body styles:

The third-generation model is known for its car-like feel, attaining a higher refinement level with better safety technology and infotainment. The latest version has a box-like exterior paired with a roomy cabin and boot space.

In Australia, the latest versions include the M and XL models, which both come with various wheelbase types and available as two-seater and three-seater panel vans. These are available in the following powertrains:

If you own a Citroen Berlingo and are looking for specific parts, we invite you to head over to Carpart.com.au. We offer sellers a place to showcase their products and buyers an easy way to search for parts. Improve your buying and selling experience – visit our website today!