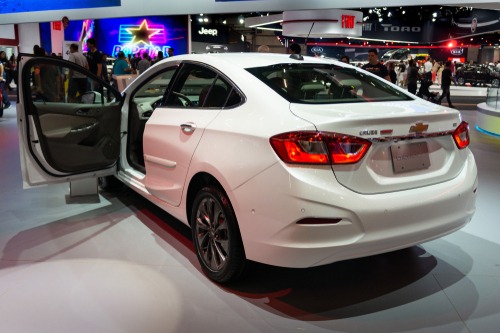 The initial Cruze, derived from the subcompact Suzuki Ignis, was announced at the 1991 Tokyo Motor Show. It was the work of GM's Australian arm, Holden. Aside from attaching the Cruze nameplate, Holden executed the styling and engineering work. The powertrain utilized either a 1.3-litre or 1.5-litre engine coupled to a four-speed automatic transmission or a five-speed manual gearbox. In Australia, it was the 1.5-litre engine (74 kW, 138 Nm) that powered the Cruze. The model had a front-engine, front-wheel-drive layout as standard with all-wheel-drive offered as an option. It entered the market as a light-duty SUV until 2008 when the compact Cruze was introduced.

In February 2009 at the Melbourne International Motor Show, GM introduced the J300 as replacement of the Holden Viva and the Holden Astra, which was dropped in 2009 August. It was given the model designation JG and came with either a 1,796cc 1.8-litre petrol engine (104 kW, 176 Nm) or a 1,991cc 2.0-litre turbocharged diesel engine (110 kW, 320 Nm). Both engines teamed up with a five-speed manual gearbox as standard, with an option for a six-speed automatic. Standard features across the range include electronic stability control, six airbags and seat belt pretensioners.

In February 2011, Holden unveiled the Australian-assembled Cruze sedan known as the JH series. It featured a revised grille, lower air intake, jewel-bezel headlamps, remodelled wheel trims, amber front indicator lights, and adjustments to the lower portion of the front bumper. The 1.8-litre engine is now mated to GM's six-speed 6T30 transmission with a diesel engine still optional for the CD and CDX trims. The 2.0-litre engine has its power output increased by 10 kW and 400 Nm for the torque.

The Sri and Sri-V sports-oriented trims are now available with a 1.4-litre engine and have their badges embossed into the grille insert. Some of the features of these models include 17-inch alloy wheels, unique front bumper design, side skirts, chrome exterior door handles, and a rear lip spoiler, among others. The Sri-V comes with additional features including heated front seats, 17-inch LCD entertainment unit that incorporates satellite navigation, keyless entry with push-start, and reversing sensors, among others.

Though Cruze's Australian stay was short-lived, there is still hope for its reintroduction in our market. With production still going on in other countries, letting go of yours may not be necessary. You can send us a request to find the car part or accessory that you need. On the other hand, if you're selling your Holden Cruze or its components, then there's no better place to do that than at Carpart. Contact us today!