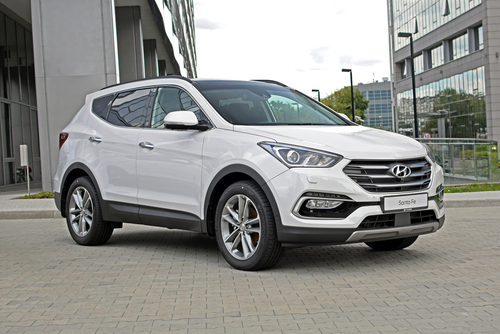 The fame of the Santa Fe precedes it. It is the brainchild of Korean-based carmaker Hyundai. This mid-size SUV's name is based on a city in New Mexico by the same name. A research conducted by Hyundai showed that the Santa Fe name was more popular than the Hyundai brand, and for this reason, the SUV got its name.

Soon enough, Hyundai Santa Fe became a household name, not merely due to the all-too-familiar name but to the top-of-the-line SUV features that Hyundai offered at an affordable price bracket. Its popularity went beyond the company's targets that, many times, production would fail to meet the market demand. The SUV sustained its success despite the strong competition posed by the likes of the Ford Escape and the Pontiac Aztec. The Santa Fe slots between Hyundai’s Tucson compact crossover and full-size Veracruz SUV.

Production timeline started in the year 2000, launching as a front-engine front-wheel-drive mid-size SUV, the Santa Fe has evolved to accommodate a front-engine four-wheel drive later on. In its second generation, it received recognition as the Top Pick car in the 2008 Consumer Reports.

The Santa Fe first hit the scene in the year 2000 with a single-engine option that was a 2.7-litre 4-cylinder unit with either 5-speed manual or 4-speed automatic transmission. It could also have a full-size Delta V6 coupled with the 4-speed automatic transmission. The Santa Fe was also made available in Australia in a 2.4-litre powertrain option later on in 2001. It came in two 4x4 trims, the GL and the GLS:

In 2002, production continued with the Santa Fe sporting minimal changes. In the middle of the year, it received an upgrade which increased fuel tank capacity from 64 litres to 71 litres. This release also featured a redesigned logo and revised interior.

Hyundai pushed out a new Santa Fe in 2003. The designers took customer complaints into account, such as installing a light in the glove compartment and a prop to the hood. Its powertrain featured the previous 2.7-litre G6BA V6 with a computer-controlled 4-wheel drive system and a Monsoon sound system. Hyundai opted to discontinue the 2.4-litre G4JS variant owing to slow sales.

The next year saw maintained market performance for the Santa Fe with minor changes in the new release. Other changes in 2004 included a revised manual climate control and repositioned the AM/FM antenna system.

The 2005 release marked the last design change of the Santa Fe. It got new taillights, grille, rear bumper, interior instrument cluster, and a refined toll ticket slot. It also came with body-painted fenders and a new Mocha frost colour variant.

The second generation of the Santa Fe came to life in 2006 with its launch at the North American International Auto Show. This defined a new-era body style, ditching the old, less sporty design.

The infotainment system was upgraded to a touchscreen with the inclusion of a rear backup camera. The powertrain was a standard 6-speed manual transmission or an optional 6-speed automatic transmission powered by a 2.4-litre Theta II 4-cylinder engine or a 3.5-litre Lambda II V6 engine.

In 2012, improvements on the Santa Fe’s interior added a new shift knob and downhill brake assist.

Innovation knew no bounds with the hybrid Santa Fe. On schedule, a New Santa Fe hybrid was developed that came with a petrol engine fitted with a 30kW electric motor powered by a 270V lithium-polymer battery.

The third-generation Santa Fe came to sport a new design that was made available in 2012. It was released during the New York Motor Show to feature two wheelbase variants of either 5-seat or 7-seat configuration. The 7-seat version comes with a new grille design and 19-inch alloy wheels, together with flush dual exhaust tips and broader body shape at the back.

The Limited trim comes with blind-spot monitoring and a rear parking camera. It features the following engine options:

The TM series, which is the fourth-generation Santa Fe, came in two launches, the first one in South Korea, with the second one happening at the Geneva Motor Show.

For diesel lovers, the Santa Fe fourth generation has got you covered. This release sports a range of engines, a 2.0-litre diesel engine, a larger 2.2-litre diesel unit, and a 2.4-litre petrol engine coupled to 6-speed or 8-speed automatic transmissions.

The trim levels and their powertrains are as follows:

The story of the Santa Fe does not end here. With a scheduled new release in 2020, the Santa Fe’s rollouts will continue to take the world by storm and prove that SUVs do not need to go with a hefty price tag.

Like any other car, the Santa Fe will need repairs and regular maintenance. You will have to replace worn-out parts and recondition ageing components to keep it up and running. To this end, Carpart has got your back. Our site is a vibrant marketplace where thousands of car part dealers and automotive specialists from all over Australia come to advertise their products and services. We'll help you get your car out of any fix in no time. Check us out today and find the best deals in auto parts and services! DFGJH