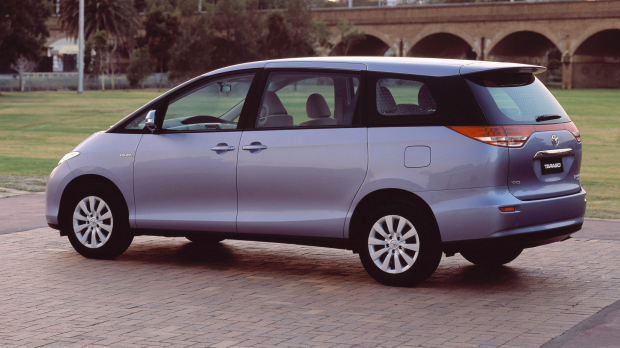 Toyota Tarago is a combination of two versions of vans produced by Toyota, namely Toyota TownAce and Toyota Previa. Certain models from these ranges of people movers are known as the Toyota Tarago in Australia. Production and export started in the ‘70s, but it was not until 1983 that they began selling in Australia. Later, a light commercial van known as H300 Granvia replaced these vans.

Some models of the TownAce/LiteAce also reached the Aussie market as utes, vans, wagons, and people movers under their original nameplate.

Toyota TownAce, based initially on the LiteAce, started production in 1976, while the Toyota Previa, also known as Toyota Estima, rolled out of production lines in 1990. The TownAce is a light commercial vehicle with pickup/ute, wagon, and van body styles, while the Previa is a minivan.

There’s no way to talk about the TownAce without going back to its LiteAce history. The LiteAce starts with the M-series, while the TownAce with the R-series. Several years later, one rebadged the other and vice versa until the two series were unified. You may refer to our other article for the Toyota LiteAce/TownAce range.

Toyota developed LiteAce under Toyota Auto Body, releasing the first generation in November 1970. It filled the void between the larger HiAce and the smaller MiniAce.

This generation had four roof variations, namely, Standard, High, High with a panoramic moonroof, and High Roof for a grade of SW. It arrived in the country in 1985 as M30/M40 LiteAce commercial wagons, vans, and people movers. The chassis codes M50-M80 were for LiteAce utes and their TownAce rebadges, which were both marketed in other markets.

The first few vans from this series rolled out from production with the same doors that the M-series had. The series went through a couple of facelifts. The first one happened in 1980 with the headlights changed to rectangular, plastic bumpers added, and some suspension refinements made. It also had an icebox and a moonroof that was electrically-retractable.

The series went through some cosmetic changes in 1982. Many of the mechanicals were based on the Toyota Hilux. The front was sloped sharply with different roof heights available. It reached Aussie shores in 1983, the first TownAce to do so, but under the Toyota Tarago nameplate, derived from the name of a town in New South Wales. The Tarago is an 8-seat people mover, introduced in the country with the following trim levels:

They were identical with the TownAce and featured the same including the slim bumpers and single-unit headlights. The five-speed manual gearbox was standard, with a 4-speed auto transmission optioned for the GLS trim. The GLS featured alloy wheels, cruise control, dual-zone air-conditioning, a moonroof, power steering, and power windows.

The GLS also received the newly updated petrol engine, the 2.2L 4Y-E (75 kW, 184 Nm) but offered with a 4-speed automatic. Its seating capacity reduced from eight to seven due to individual seats replacing the bench-type seat. By 1988, Toyota added the following on the existing Tarago offers:

In 1990, Toyota continued to produce the LiteAce and TownAce for most of its global markets. The Australian buyers continued to access the LiteAce range until 1992, after which TownAce replaced it. You will find the rest of the series in our Toyota LiteAce/TownAce article

The Tarago, on the other hand, took on the first-generation Toyota Previa as its new base. With this change, it also enters a new class, that of a multipurpose vehicle or MPV. Its functions remain the same, a people mover with seven or eight-passenger capacity.

‘Wombat’ is the nickname for the Previa-based Tarago in Australia due to its funny resemblance to the country’s native marsupial.

Brought to life by a Toyota-based designer and a Calty-based designer, the first generation came out in January 1990. The previous trim levels were carried forward and were now available in 4-speed automatic aside from the manual-only offer before, except for the RV, which remained manual.

By 1991, the GLi also received the upgraded 2.4L petrol engine paired with either a 4-speed automatic or 5-speed manual.

Between in 1993 and 1994, there were changes to the names of the trim levels. The Getaway became a regular trim and now named Getaway II, while the range-topping GLS became Ultima, all powered by the 2.4L petrol engine. The Getaway II was available in both manual and automatic, while the Ultima was automatic-only.

This generation was produced with both sliding doors for rear passengers. The models sold on the European markets were readily available in diesel and petrol engines. Australian models (aka ACR30R), however, were only available with the 2.4L engine (petrol) and 4-speed automatic. So for the second generation, the Tarago had a streamlined range now including only four trims, all powered by the new 2.4L 2AZ-FE inline-4 petrol engine (115 kW, 221 Nm) and available only in 4-speed automatic transmission. They also now have four doors.

The third-generation Tarago utilized an uprated 2.4L 2AZ-FE engine. To make it more competitive with its market rivals like the Kia Carnival, Toyota offered a V6 engine for the Tarago range. Here are the new trim levels:

The Tarago received several updates, one in 2009 and another in 2012. In 2016, the Tarago went through another facelift, which updated its interior. The facelift added to its standard equipment to enable it to compete with its rivals. It now has a multifunctional steering wheel and a restyled center console with a large touchscreen infotainment display. The 2.4L engine also now comes with a CVT, replacing the 4-speed automatic transmission that it had for quite a while.

If you need replacement parts for your Tarago or other cars, please feel free to browse our website. We have thousands of sellers from all over Australia, which increases your chance of finding the specific auto part you need. You might even find a seller near you!