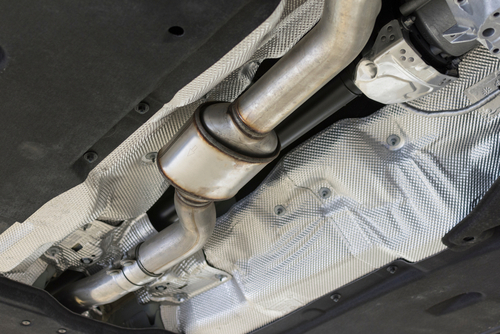 What Is a Catalytic Converter?

What Is a Catalytic Converter or Cat Converter?

The catalytic converter (aka cat converter, cats, or cats-con) is a pollution reduction component in a vehicle. It is one of many behind-the-scene workers responsible for keeping your car running optimally.

A cat converter's principal function is to clean harmful gases from a car’s exhaust emissions.

This auto part is often underrated and under-appreciated. Although it plays a crucial role in ensuring that vehicles remain roadworthy, not many car users have it at the forefront of their minds. Heck, some don't even know it exists.

This is why we’ve come up with this guide, to explain to car users like you what you need to know about the catalytic converter.

What Does a Catalytic Converter Do?

Hydrocarbons, carbon monoxide and nitrogen oxides are the three harmful gaseous compounds produced as byproducts from running your car and burning fuel.

It is the job of the catalytic converter to help convert these toxic compounds into harmless compounds.

A catalyst, by the way, is a chemical that hastens the rate of chemical reactions without changing itself in the process. If you took sciences in high school, such as chemistry or biology, you should remember this. If you didn't, let's use your imagination to help you understand what a catalyst is:

Imagine an athletics coach or a crowd of fans standing by the side of a track and cheering the runner to go faster. Remember, only one person is doing the race. The coach and the fans do not run; they stand (or sit) and scream, cheering the athlete to move at a faster rate.

While they don't join the race, their presence and action affect the performance of the runner. A similar type of relationship is what exists between the catalyst and the chemicals involved in a reaction.

Bottom line, the catalyst's job in the catalytic converter is to speed up the rate at which gas pollutants are removed without reacting with the chemicals and components.

How Does the Catalytic Converter Work?

There are two different catalysts in a catalytic converter, each distinguished by the chemical process involved.

After the catalytic converter’s job is completed, the elements and compounds emerging from the exhaust pipe are nitrogen, oxygen, carbon dioxide, and water. The day is saved!

What Happens When the Catalytic Converter Goes Bad?

A faulty catalytic converter will usually produce one or more of the following symptoms that alert the driver about the impending replacement required.

This is the most common symptom associated with a bad catalytic converter. A blocked converter will restrict exhaust outflow, affecting engine performance.

When the catalytic converter does not function correctly, reduction in power, acceleration, and fuel economy becomes inevitable.

2. Sulphur Smell from the Exhaust

During the combustion process in the engine, sulphur-containing petrol undergoes a process that converts it to hydrogen sulphide. Without the help of an active catalytic converter, the burnt petrol cannot be converted into odourless sulphur dioxide.

Okay, forget all that chemistry stuff. Here's a practical tip that your nose won't miss for sure.

You'll likely notice a rotten-egg-like smell coming from the exhaust - that smell is caused by the unburnt fuel left in the exhaust by a bad catalytic converter.

The ‘check engine’ indicator light on your vehicle’s dashboard is expected to call the attention of the driver to a fault that’s developing in the car. A faulty or failing catalytic converter can cause the ‘check engine’ light to come on.

In some modern vehicles, the oxygen and air-fuel ratio sensor monitors the converter's efficiency by tracking the gas level in the exhaust. If any abnormality is noticed in the gas level, it sets off the ‘check engine’ alert.

If the catalytic converter becomes worn out or internally damaged, it can cause a breaking apart of the catalyst-coated honeycomb. The result?

You’ll hear a rattling sound coming from beneath your vehicle. The rattle may be more observable when starting the car and should get worse over time if left unattended.

If you notice any of these signs, chances are, your vehicle is emitting excessive amounts of gases that are toxic to humans and the environment. It just might be the right time to get your car inspected by a technician to determine if the catalytic converter needs a replacement.

So there you have it: Your course, Catalytic Converter 101 is now complete.

If you’re looking to change or upgrade any part of your car’s exhaust system, you’re welcome to use CarPart AU’s auto parts finder. It’s a free tool that makes locating car parts sellers fast and easy! Get a quote now!